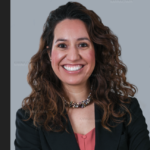 Evolution of mentoring at Saudi Aramco: how women influenced change

At Saudi Aramco we believe our greatest asset is our people. With the recent rise of women entering workforce, there was a great need for a Mentorship Programme to support their unique journey.  In 2016, the Diversity & Inclusion Division launched the Mentorship Programme aimed at helping women find qualified mentors.

In this session, the audience will have the opportunity to learn about some of the experiences of women in Saudi Aramco – past and present.  Additionally, the session provides an overview of the Mentorship Programme framework and findings. It will conclude with a way forward in sustaining the program and enhancing the overall mentoring culture at Saudi Aramco.

Karina Chapa joined Saudi Aramco in 2012 serving various roles in that include: second grade teacher, foreign language instructional coach, D&I program facilitator, leadership coach, and Mentorship Programme manager.  The core of each is role is teaching others by providing space and opportunity in a fun and engaging way.  Karina’s most notable work in D&I Division is creating and managing The Mentorship Programme which has evolved over the years to serve the Saudi Aramco’s needs.  The programme is the only mentoring program in the Company to receive global accreditation from the International Mentoring Association. Both mentees and mentors have stated that this program drastically improved their career and life.

Karina believes in volunteerism and lifelong learning.   In 2005 Karina founded Fundacion Activa Houston, a grassroots non-profit aimed at serving underprivileged communities in El Salvador, Mexico, and Houston.  Since 2015 Karina has been managing Eastern Flames Football Club (EFFC).  EFFC is the first women’s football club in the Kingdom and the first Suadi women’s club to play internationally, in Gulf countries.  EFFC has gained so much visibility and support from the Saudi General Sports Authority and Saudi Arabian Football Federation that EFFC players have represented the Kingdom from USA to Malaysia on official projects.  In October 2020, EFFC will join the first ever ‘Kingdom Women’s League’.